Cycled to my 'local' cafe for my 'usual' ie pain aux raisins and a large (grande) cafe creme.

Sat outside this time since it was a very warm morning.

Continued to read about the literary angle on La Nausee and came across yet another new idea - new to me that is. This is the contention that the primary role in defining a novel is played by the reader and not the author.

I'll have to think more about that. 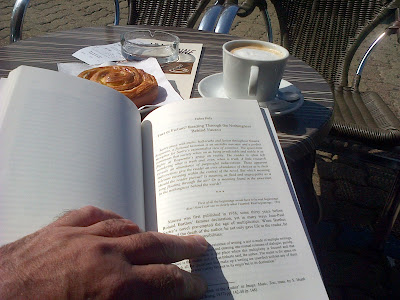 As I cycled back pondering upon the import of Sartre's philosophy for me personally, it occured to me that there are two (possibly related) senses to the word "meaning" in such expressions as:  "life has lost all meaning".

The most commonly expressed sense, I suspect, is where a person can see no purpose in life, "What's the point of doing anything? of striving for anything? etc etc"

Luckily, I've never  suffered from that kind of "loss of meaning".

A less common experience is where everyday objects lose their meaning. Tables, clothes, trees, cars, the sky, the ground, buildings, laptops, door handles are all objects which present themselves to us under the cloak of socially constructed meanings. These meanings are constituted in the form of 'labels' or 'words'. But, when those labels or words fall away from the objects in our everyday life and we are just left with their lumpiness, their solidity, their roughness, their smoothness, their weight then we can also say that "life has lost all meaning."

I have frequently suffered from that kind of  "loss of meaning".

That is why Sartre's La Nausee has always been such an important book for me. Sartre uses the term 'nausea' to describe that experience of the physical world "losing its meaning." That's what the book is about. 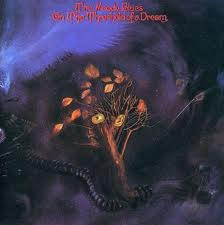 From 1969, "On the Threshold of a Dream" by the Moody Blues. From the heyday of the British concept album. But, despite that baggage of pretentiousness, I always liked the songs on this album.

Made in the cabin from items bought in local shops in Lacanau-Ocean.

I also purchased some cheese and pate from the same butcher who sliced me off two slices of veal by holding his bare hand against the face of the meat and then slicing behind that hand with a big cleaver.

Then, with no washing of the hand, straight over to the cheese and then the pate.

Rupert Everett's "Red Carpets and Other Banana Skins". Not only is this book so funny that I've been almost crying with laughter but it is also supremely (and, I think, importantly) politically incorrect. That is political incorrectness of the most morally correct kind.

I'm only at chapter 6, but I think it is actually a superior book to his "Vanished Years" - on the one hand, there are brilliant descriptions of the Norfolk landscape, on the other hand he evokes brilliantly the confusion of growing up.