Covered the flat roof with a collage of French newspaper titles. 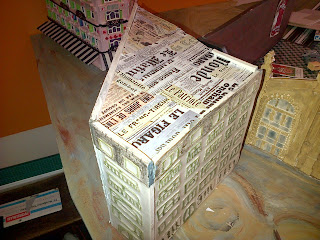 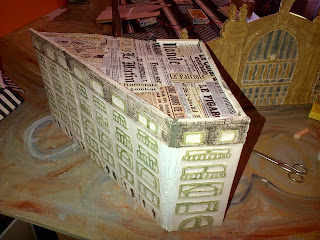 The white ridges around the roof will have to be toned down and the chimneys added. 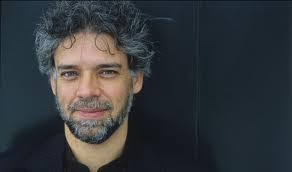 A review on Radio 3 this morning of the last CD in Francois-Frederic Guy's series of recordings of the complete Beethoven sonatas.

At the Shenaz restaurant, Glasgow.

Unbelievably interestingly, I have just read the introduction to the book by Valentine Cunningham. I desisted from reading this earlier in case it gave the story away in some sense.

"An Accidental Man, Iris Murdoch's fourteenth novel, is a candidate for being her most discomfited and most discomforting one     ..........   in which love is betrayed ignominiously, the morally lowest and most cynical flourish and unremittingly pessimistic visions of human goodness triumph.

"It is not uncommon in Iris Murdoch's fictions for the would-be good people and for goodness to flounder, for the godly to renege and to fall, for moral mayhem and evil to flourish, for moral crashes and smashes and disasters to abound and for some fearful accident to occur as the sign of humanity's proneness to moral bad luck. But the scale of such negativity in An Accidental Man is what makes its pessimisms seem so arrestingly awesome......"

Crikey, I can't even read the rest of the introduction!!!