After 4 days of glorious weather (I think that's the adjective that goes with sunshine) it rained heavily for most of yesterday. So, like everyone else, we set off in the car for our annual "find the 'Le Clerc'". Le Clerc is a chain of gigantic supermarket complexes. This one at Royan was no exception even having an underground car park that would have graced an airport. Actually, the complex  was about the size of an airport terminal.

The main purchase was a decent kettle. Drinking tea is a major activity in my life. 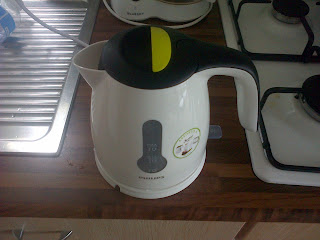 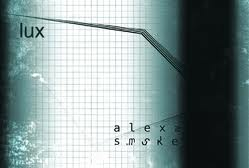 Wasn't sure what Marco Polo tagliatelle was, so looked it up afterwards on the internet. Still didn't find out, but it seemed to have some kind of sea food in it. Nevertheless, it still went OK with the lamb.

Cost per head including very, very cheap wine from I'lse d Re: £4.50 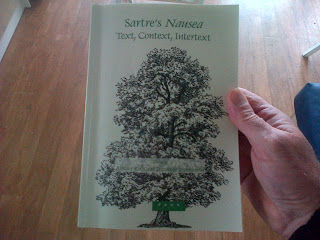 This book looks at Sartre's 'La Nausee' not only as a work of philosophy dressed up as a novel (which is the way I've always treated it) but as a work of literature - a novel, if you like.

Ironically, for decades, La Nausee has been a set text for all High School children in France - at least those going on to do the Baccalaureate. But, every news bulletin here  includes a piece (our French isn't up to translating  exactly what's being said) that seems to suggest that that's all about to change and that from next year French school children are going to learn about more economically relevant subjects instead.