Sticking down some pavements.

The cardboard pavements around the street cafe had been curling up at the edges and so I decided to use super glue to address the problem.

The January edition of Optimo on Rinse FM. It's great being able to store these radio programmes on iTunes and then re-play them whenever the mood takes one. 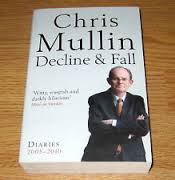 I hadn't realised that Chris Mullin had had  to get his diaries vetted by the Cabinet office before they could be published - "not may deletions, however".

Mullin quotes in this volume a comment made by Roy Hattersley in a Daily Telegraph review of an earlier volume - "page after page exudes the conviction that he (Mullin) is morally superior to those around him."

That's kind of the impression that I'd got as well. Still, a brilliant read.

Last night cycled to the GFT to see a documentary about Chris Manak,  the American founder of Stones Throw Records.

Chris Manak is one of those visionaries who over the last 15 years in the USA has sought out and promoted all sorts of weird and wonderful musical talent; rather in the way that John Peel did in the UK. I feel greatly  indebted to folk like them. My life would be poorer without them.

He took part in a question and answer session after the film. The auditorium was packed and the questions and indeed answers were very entertaining and informative.