A reminder of what I'm aiming to build from architectural clay.


A real slog last night: cutting out all the windows. The idea is that I cut right through the clay around each window BUT do not remove the clay rectangle. That rectangle is left in place so that the overall wall does not lose its strength. After firing (I think) one taps the clay rectangles and they pop out leaving the apertures ready for window frames of some sort.


I wasn't terribly sure whether the knife had cut all the way through so I flipped the clay over and cut from the other side as well. But before flipping, I poked a needle through all four corners of each window to make sure I had some indication of where the windows actually were - there being no guide lines on the back of the clay


At this stage the clay, which has been kept wrapped up in cloth and polythene and stored in a damp cupboard from week to week, is approaching leather hard ie drying out but still malleable enough to be carved and etched.

In preparation for attending their concert on Friday night, I downloaded another Hot Chip album from iTunes.

This time it was:

Very much my author of the moment.

Currently reading his "The Books in My Life" which is an account of the books which have exerted an influence on his life: each chapter a different book.

He starts with the reading matter he remembers being given as a child and moves through to adulthood. 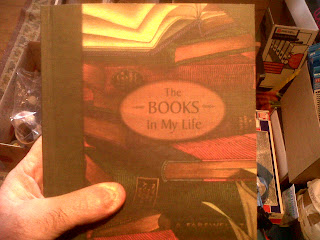 I think he is right about that: the opposing sensations of futility and joie de vivre seem to me to arise as a result of events outwith one's cerebral life.

However, I have reservations about one of the examples he uses to illustrate this view.

He states as a truism that no matter how futile life seems to us, if we suddenly hear the smoke alarm going off in the kitchen we are instantly galvanised into action. We jump out of our armchairs and our consciousness is  no longer full of a sense of life's futility  but with a strong enthusiasm for having a nice clean and functioning interior to our kitchen

But I remember an incident 40 years ago when I worked in the long-term schizophrenic ward of a psychiatric hospital (or asylum as it was then called). Having been with the male occupants for some months and observing and indeed having become part of their daily routine, I began to wonder if some of them weren't pretending to be mentally ill.

Such doubts went up in a cloud of smoke when one sleepy Sunday evening in the common room/sitting room someone set a pair of curtains on fire. The room was big with the high ceilings and tall windows of the Victorian age in which it was built. So the curtains were pretty big.

What amazed me was that the only people who panicked were the nurses - dashing about for buckets of water and fire extinguishers that worked. The patients sat on as if nothing was happening even those who were sitting more or less under the flames.

It was an interesting albeit accidental experiment.