Had a time-saving idea: mixed  half-PVA half-water  plus drop of detergent in a Fairy Liquid bottle, thinking it would be a good way of drizzling over the ballast. 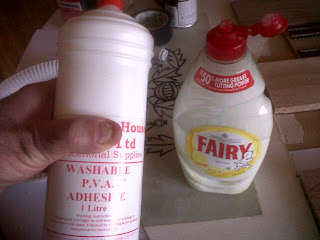 It wasn't. The water and PVA didn't mix properly despite fulsome shaking of the bottle and either thin water or thick PVA came out. 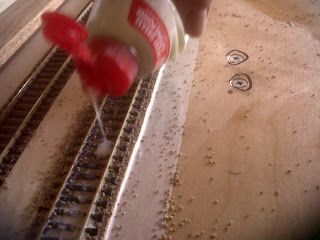 Result was a mess. 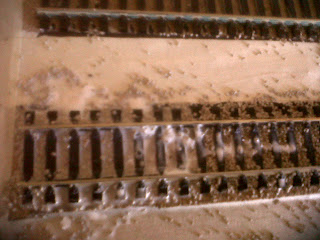 Even after drying and some tidying up, it still looked unimpressive. 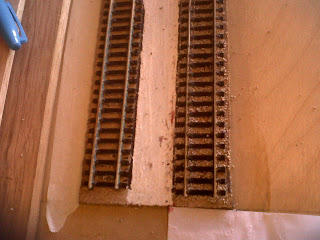 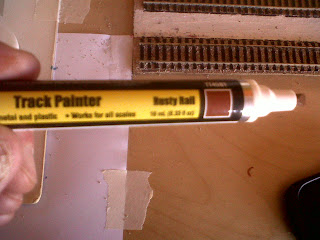 One runs the pen along the edge of the track to create a rusty appearance. It didn't transform the visual failure. 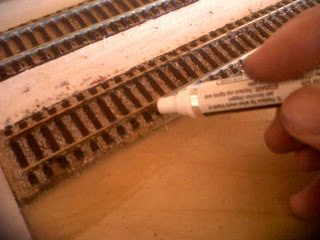 On a whim, blackened a stretch of the gap between the tracks. Not what I'm looking for. 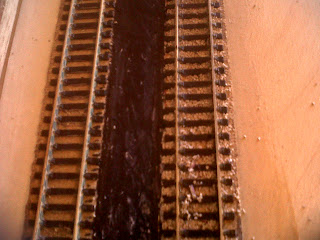 On another whim drew this turreted pattern between the tracks. 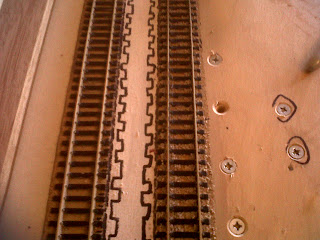 A REMINDER OF WHAT I'M TRYING TO ACHIEVE:

In an earlier blog I decided that flexitrack was so beautiful in itself that it was pointless trying to convert it into mock-real track by using tricks like Track Pens and ballasting.


The only reason I tried ballast again was to fill in the gaps between the sleepers with a light colour which would thus highlight the structure of flexitrack by contrasting with the dark colour of the sleepers.

The alternative was ripping up all the track and painting the underlay white - no way, Jose! Or, trying to paint white in between the sleepers - impossible! Or, slipping white paper beneath the track - again, impossible.

I'll dig out the ballast that I've PVA-ed into that approximate 50cm stretch of track which features in the pictures at the top of today's blog. Then I'll paint white the gap between the tracks and draw on that turreted pattern seen above.

Had a fantastic meal last night in a small restaurant at the top of our road - An Lochan.

Been there two or three time before and found it to be exceptional.

Forgot to photograph the first course which was pork terrine with plum sauce. Brilliant.

That was followed by Pig's Trotter: 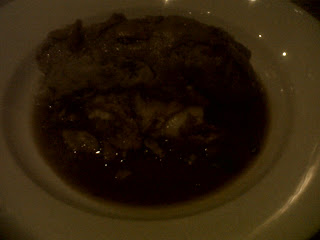 A poor photograph but it was fantastic.

Every now and again one can be innocently watching TV or listening to the radio and something will come on which blows one away in its originality and brilliance.

The appearance of the American group from Ohio on Old Grey Whistle Test in the 1970s playing Jocko Homo and the chorus: Are we not men? We are DEVO was such an event. 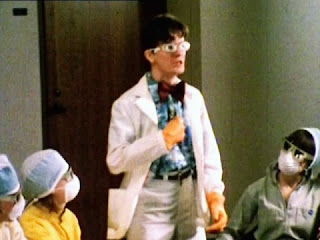 Looked out the album from my collection of now unplayed vinyl. 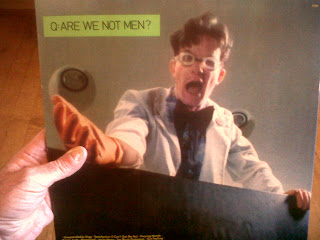 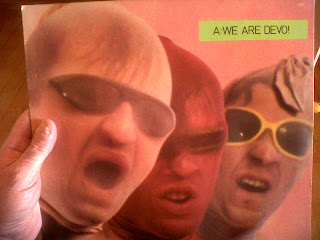