Gave the platform edges another coating of purple magnet paint and also a coat of gloss varnish; all in the hope of matching them more closely to the violet mosaic tiles that will be laid along them.. 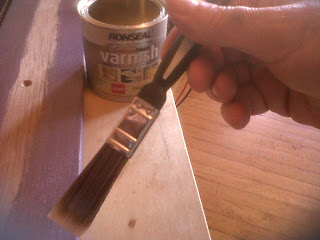 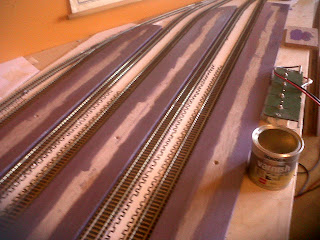 Then I was about to screw down the platforms into their final position when I thought I would do a final clearance test. To my horror the left hand edge of the central platform in the picture above will need to have at least 0.25 cm shaved off it. Both a set of carriages and the autocar in the picture below not only rubbed against that edge but ended up completely jammed against it. 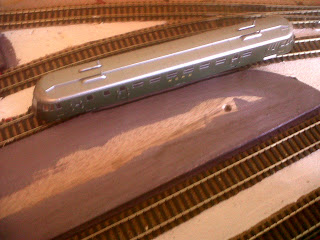 It's this kind of hitch which reveals a real weakness in my character - I can't cope with hitches: I like everything to run smoothly.

In this respect, I contrast myself with my wife. She can spend hours possibly days knitting a garment and then discover the tiniest error involving one stitch - and will unpick the whole lot and do it again.

I think we're all familiar with the person who espouses all sorts of grand moral theses but treats individual people like dirt.

Colin Wilson quotes Kierkegaard who objected to "Hegel's great system on the grounds that it is like trying to find your way around Copenhagen with a map of Denmark on which Copenhagen appears the size of a pinhead. Confronted with human misery, reason often falls silent."

The obverse (or is it the inverse or merely the reverse) is also true in my experience: one comes across all sorts of people who  show no interest in moral systems but who are consistently kind to their fellow man.

Listened to Desert Island Discs on Radio 4 and then immediately afterwards, "Private Passions" on Radio 3. Both programmes invite a distinguished guest to choose records that mean something to them while they talk about their lives in between.

Each in their very different ways have led fascinating and impressive lives and both declared a passionate interest in music.

But despite my being won over by both of them I found their selections of records to be mundane (except for one by Mrs Siddiqui, "Bhar di Johli", by two brothers, Ghulam Farid Sabri & Magbool Ahmed Sabri).

I will seek out more work by the Sabri brothers.
Posted by Tony Morris at 15:30