Basically, there was some glazing to be applied to window frames and some other details but nothing else could be undertaken until that glazing was fired. And, there was no point starting anything else. 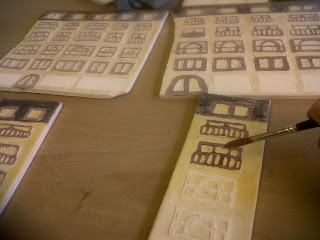 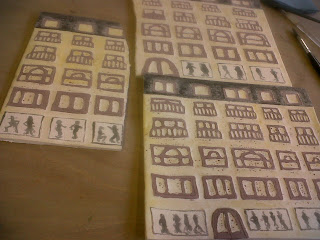 More or less on a whim, painted in some figures in the "shop windows" on the ground floor to suggest some kind of Parisian fashion shop.

The glaze (strictly speaking, an underglaze) used for the window frames is "Bullfrog Green". Like almost all underglazes it bears no relation to the colour that it will be when it emerges from the kiln. So what is brown at present should emerge as green!

Composer of the Week on Radio 3.

This week, the suave and erudite Donald Macleod discusses the life of the great 20th Century Danish composer Carl Nielsen whose 5th Symphony is one of my favourite pieces. 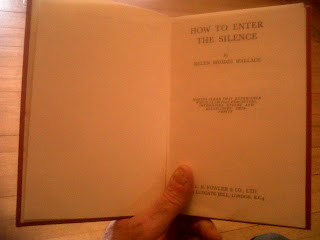 The author is a bit of a crank and tries to ground her thoughts about spiritual meditation in some spurious theories about electrical fields and life forces which she claims have been detected and measured by electrical meters and other apparatus.

"At a recent meeting of the British Biological Association (in the 1950s I would think), a Mr Ashton exhibited an electrical apparatus which he had perfected which registered the action of Invisible Life Energy pouring ceaselessly into man." p16

But, if we strip away all that tosh, we are still left with some interesting spiritual statements.

"Spiritual consciousness is a matter of growth. It is not attained haphazard any more than mathematics is learned by guessing at it." p62

And referring to the efforts of someone called Brother Lawrence to attain spiritual insight:

"Naturally he experienced many failures, BUT WITHOUT BEING DISCOURAGED HE SET HIS MIND RIGHT AGAIN and continued his exercise, until he arrived at a state wherein it would be as difficult not to think of God as it was at first to accustom himself to it." p63 (the author's capitals).

I have two thoughts regarding these two quotations:

Firstly, I am of the opinion that spiritual insight is, if not haphazard, then NOT a matter of growth. It just happens. Christ's message is simple and accessible (as Jesus tells us) to children.

Regarding the first point: what about Paul's First Letter to the Corinthians?