Final 3 platform lamp posts arrived and one day I'll get round to installing them!

In the mean time, they've all been laid out in their eventual position. 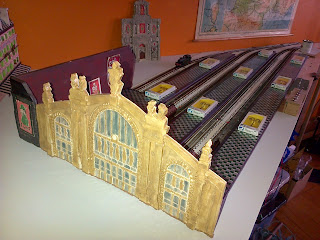 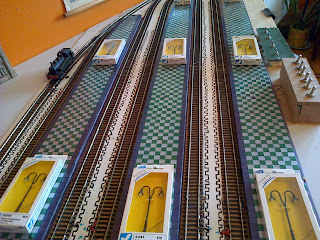 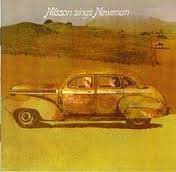 Purchased an octopus yesterday morning which Fantoosh, Glasgow, prepared for me ie they removed unwanted bits but kept the essential wholeness of the thing.

Read dozens of articles on the web about the best way of cooking octopus and all of them seemed to conclude that whatever method you used, it would probably end up tough and chewy.

Most suggested that it should be boiled for hours. Some that frozen octopus were easier to make tender than fresh and there was loads of other advice.

I was almost on the verge of putting the octopus into the freezer and tackling it another day; cooking a fresh one seemed asking for trouble. But, instead I decided to be brave and ignore all the advice and warnings on the internet and instead follow a simple recipe for 'Octopus a Lagareiro' given to us by the staff in the Lisbon hotel we recently stayed in. 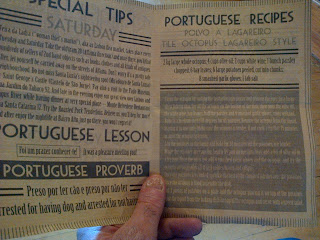 Basically, that recipe said this:

Place whole fresh octopus in a baking dish, cover with olive oil and white wine and cook in a medium oven for 45 minutes. Take it out and fry it for a few minutes to crispen it up and then serve.

So, that's what I did. Used a whole bottle of olive oil to ensure the octopus was completely covered.

Also, baked it for over an hour (probably 90 minutes) rather than just 45 minutes. It hardly needed frying afterwards.

Perhaps it was beginner's luck; perhaps the higher temperature achieved by cooking in oil was the secret: but the end result was perfect. Perhaps the most satisfying dish I've ever eaten at home.

The meal costs per head for the last 7 days are:

To reprise: A few months ago I decided to give up all work for 6 months or so in order to get closer to God. I embarked upon a regime of exploring meditational techniques, spiritual reading and miscellaneous activities that might assist me in my quest.

I was willing to go wherever the inclination took me.

What actually happened was that after only a couple of  weeks, my quest ended. There was no need to carry on with the search: Christ came to me. He literally sat down beside me and told me that He loved me. He is beside me now.

I must be accurate. About two and a half weeks ago, I lost Him for a couple of days. I was bereft. I didn't know how to get Him back. But He just came back and hasn't been away since.

I can't explain that 48 hour hiatus.