Have routed the wires from the isolated sections of track to the edge of the baseboard where they will be connected to a bank of  ON-OFF switches. See recent blogs for background to this.

Here's a review from the internet by someone called Chris Mann.

I've highlighted in bold the phrases that caught my attention.

According to popular legend, Thom Yorke exploited the once futuristic powers of the MiniDisc to sequence Radiohead's OK Computer, going through all the possible combinations again and again to the point of madness. Glaswegian Alex Menzies, AKA Alex Smoke, might have used more modern technology—an iPod shuffle at the very least—but I can imagine him having a similar problem with Lux. After all, how do you sequence an album where every track sounds like a new beginning? Each track arrives like a door opening and ends with it ajar, the promise and mystery of endless possibility lurking in the room behind.

Despite the constant changes of direction, though, Smoke has succeeded in sequencing Lux properly: It's an album which comes across as a unified and satisfying whole. Restlessly diverse, Lux embodies the same "coherent images in randomness" tag that Soma used to describe his work for the label. Even so, it's no retread: Lux is another step forward in production mastery from an already accomplished beat scientist, which incorporates more dubstep and wonky sounds into the mix in place of the minimal sound of 2007's Paradolia.
"Filla" and "Physic" are dark and bleepy like wonky outcasts, despite being almost beatless. "Master of Tomorrow" places dubstep's trademark handclap percussion over kaleidoscopic synths that wouldn't sound out of place on a Flying Lotus album. Indeed, the similarities and differences between Smoke and FlyLo are intriguing. Both mash and stretch sounds into collages with an almost seasick abandon. Smoke holds back, though, wielding a restraint and control over the final product that makes his productions more comprehensible than the wild abandon of Steven Ellison.

This leads to some disappointments. Despite the innovation, Smoke recycles some of his tried-and-true formulas. "Northwoods" sees Smoke return to his classical upbringing to blend sweeping strings with hyperactive synth runs in the same way that he did on the more orchestral tracks off Incommunicado. Opener "Ikos" similarly mixes rich orchestration with bird calls and purring electronics. The sleazy paranoia of "Platitudes" and its vocoder refrain recall several early tracks, whereas "Blingkered" with its swarm-of-bees menace and the minimal force of "Paracelsus" will satisfy fans looking for a techno fix. The single "Lux+" is a strange one for vinyl, though, since its irregular percussive accents and tripping, chopped vocoder seem a little messy for the dance floor.

Lux isn't necessarily built for those purposes, however. Indeed, it's an album which simply reconfirms Smoke's credentials as an innovator of electronica, seamlessly fusing current trends and an experimental palette into an enjoyable pop framework. 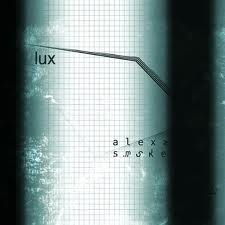 Forgot to photograph it, but it was basically half a cheap Pizza.

I mentioned in yesterday's blog that I thought that the front cover designs of the various books in the Fontana Modern Masters series could be arranged to make a pattern of some kind.

There seem to be 5 styles of patterns and I've arranged them on the floor to see what I could come up with. 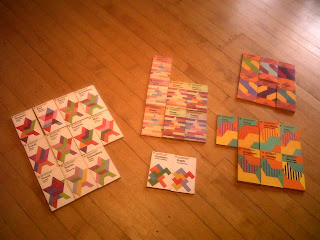 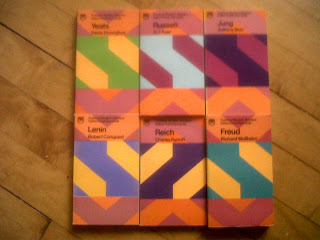 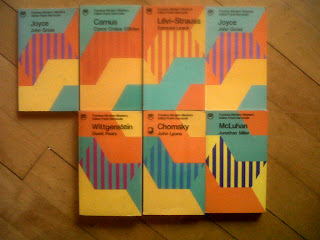 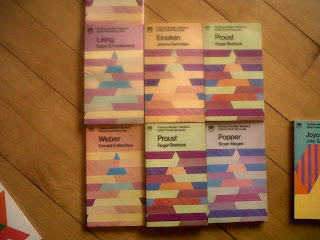 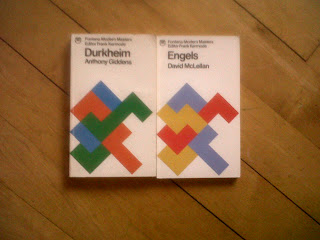 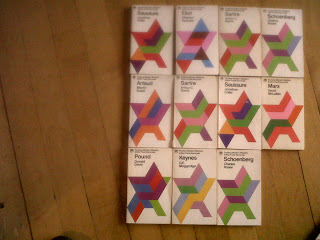 And sure enough, on the web, there are hundreds of images made up of these book covers. 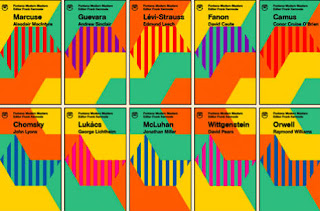 More of that tomorrow.