Awaiting a delivery of 6 on-off switches from the internet to allow me to pursue the wiring of the 6 isolated sections of track necessary for DC running of layout.

So, in the mean time, here are French railway connected pictures from the web.

The first is by one of my favourite early 20th Century painters, Albert Marquet. It is of the station at French Algiers, and sold at auction at Christies in 2005 for £18,000. 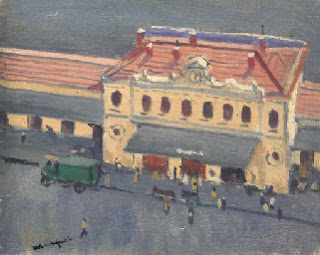 Here is a painting from the same era by Paul Delvaux, a Belgian. It's called "La Gare". 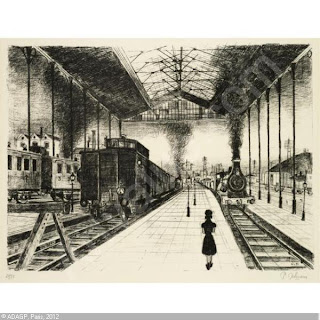 And while I was browsing, I came across this painting by another favourite painter, Marc Chagall.

From the same era, and I thought that something like it would make a great backdrop for my Parisian townscape.

Got iTunes set to shuffle ie random and a great and unexpected series of tracks has come up, many of which I'd forgotten about.

Recorded in 1968, Ringo Starr is the only Beatle to appear on it, singing to an orchestral backing. It was written by John Lennon who had asked George Martin to create the ambiance of one of those lush Hollywood Musical love songs. 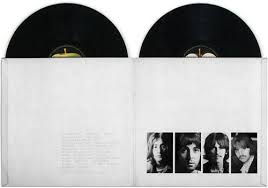 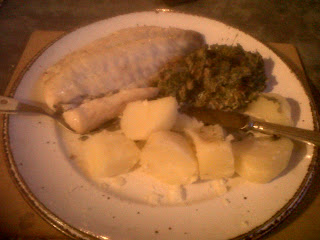 For me, until recently, trusting in God, seemed to require a hell of a lot of bravery. Now it requires no courage at all; it's simply not a matter of courage.

Frequently, I'll open at random either the Bible itself or a religious tract of some kind. Last night, before falling asleep I opened this book at random. 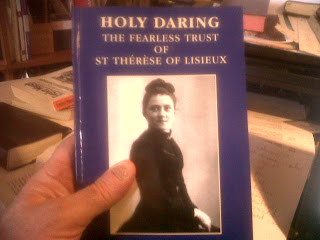 For St Therese, there simply could be no comparison between our sins and His mercy:

"if I had committed all possible crimes," writes St Therese, "I would always have the same confidence; I feel that the whole multitude of offences would be like a drop of water thrown into a fiery furnace." p 58

Until recently, I kept trying to bribe God into being merciful towards me and those I loved. Now I simply ask him to be merciful.

This has marked a shift in my attitude towards intercessionary prayer.

Whereas before I assessed the likely success of an intercessionary prayer in terms of quantity, now I assess it in terms of sincerity.

Whereas before I would spend hours each day agonisingly trying to concentrate while I ran through the correct format of a prayer - a self-inflicted format, I might add. Now, I simply express the intention of the prayer.

And this is where Daring comes into the re-evaluation of my past prayer practice. In the past I was scared that if I deviated from the practice of, say, repeating a request to God 50 times, then God would turn the request down on the grounds that I hadn't paid him enough: as if prayers were a kind of currency.

It would have taken courage on my part to accept the doctrine that one need only say a  prayer once but sincerely.

But now, I do not need to be courageous to accept it. I trust in the infinity of God's mercy. He expects me to trust him automatically and cheerfully.