Made from card a trial awning or canopy for my pink Boulevard Haussmann building. Added some stripes with a magic marker and sat some HO scale cars in front of it.

I'll make a more robust version of the awning from plasticard and colour it with green and white stripes. There will also be similar awnings to the front and to the other side of the building.

But this card version will do for now to check that I've got the scale correct.

Eventually, I'll make some little tables and chairs and people them with HO scale figures - possibly made out of FIMO. 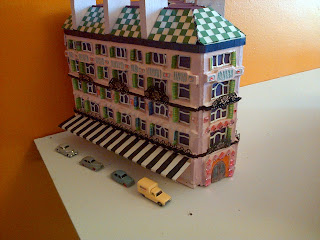 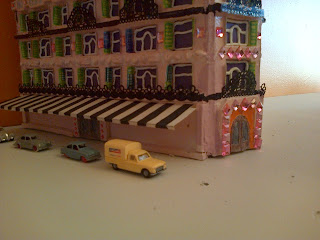 My continuing love affair with Lieder:
It's great when one looks forwards to something and it doesn't disappoint.
Last year I reported in the blog about my Damascene conversion to Lieder, a musical form I'd hitherto loathed.
The cause of that conversion was seeing James Gilchrist perform Schubert's "The Miller's Song" in Edinburgh.
http://www.frenchmodelrailway.com/2012/03/james-gilchrist-tenor.html
The key to the conversion was my physical proximity to the singer. James Gilchrist didn't just sing 'The Miller's Song', he was the young and love-tortured miller.
I was moved.
So, when the opportunity arose to see The Miller's Song being performed in Glasgow last night by a different singer and accompanist: the Austrian baritone, Florian Boesch, accompanied by the much-esteemed pianist Malcolm Martineau I made sure that I had front row seats so that I could feel that physical proximity again.
All I'll say is that once again I was hugely moved: Florian Boesch was indeed the miller. I was spell bound and didn't take my eyes off him for the 65 minutes that the piece lasts.

Apparently, Boesch's approach which is to be totally emotionally involved with the character of the miller is not an approach that's universally approved. Some prefer a more emotionally distant and aesthetically pure approach. Those who hold the latter view tend to say things about their favourite singers such as , "Oh, he could sing the telephone directory as far as I'm concerned."

I don't hold that view. I was pleased to discover that one of my favourite old-school tenors, Hans Hotter, who was also criticised for being less than technically perfect but always acknowledged to be a brilliant live performer, himself taught the singer who subsequently became Boesch's teacher.

Anyway, when I got home from the recital (which was in front of a packed and ecstatic house) I purchased a ticket to see the same pair perform Schubert's even more love-torn song cycle, Winterreise, on Sunday at Glasgow City Halls.

Almost a total sell out but managed to get one ticket in the very back row. That will test the physical proximity to the performers argument.

A bag of chips from the Oxford Fish and Chip shop in Glasgow. 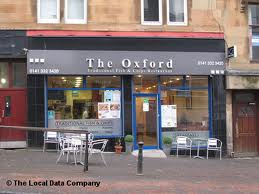 Washed down with a can of Vimto. 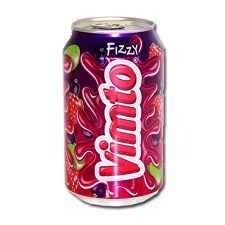