Have laid out the components and tools required for me to produce 3 overhead street lights. 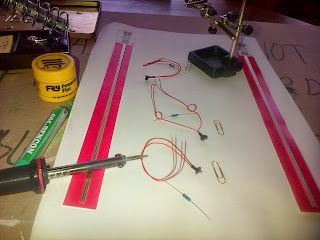 The aim is a slightly neater version of this - times 3: 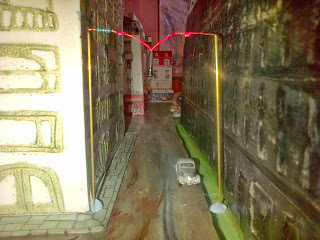 Fairly boring, but her choice of music was pretty good. And, she did choose as one of her 8 discs (they call songs "discs" on this programme), one of my favourite songs.

Apparently, she went on a 6 week course at the Wharton Business School (I'd never heard of it). Kirsty Young, the host, said that she'd heard that attendance on one of these courses was often a life-changing experience/a cathartic experience. Carolyn McCall didn't go that far but said she'd benefited from attendance at the course.

However, my curiosity was aroused. How could a 6 week business course have such a fundamental effect on an individual?

Last night, we went to Cottier's Restaurant in the West End of Glasgow where the food is excellent but the seats are hard, slippery and too low for the tables.

The main problem I have playing the bongoes is shifting, rapidly and seamlessly between alternate loud and soft strokes.

I can make the shift when going through a pattern of strokes very, very slowly. But, as soon as I speed up, the so-called soft strokes become as loud as the so-called loud strokes.

For example, the Bossa Nova pattern is this - where L = loud and S = soft.

The soft strokes are produced with the left hand alternating between thumb and hand. The loud strokes, except for the penultimate stroke, are produced by striking the drums with the right hand. 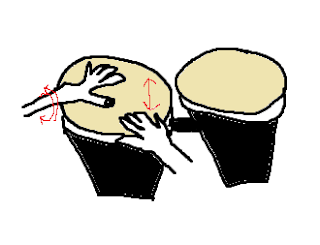 I find this shifting between loud and soft almost impossible to achieve. I'll just have to practise.

On the way to the fishmongers this afternoon, I espied this unlikely looking rural lane in the middle of a built up area of Glasgow. Cycled along it. 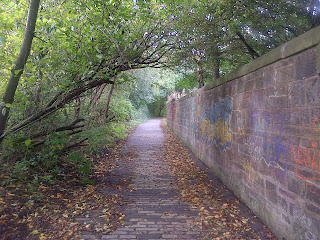 Disappointingly, it brought me back to this modern complex of flats built on top of an old hospital car park. 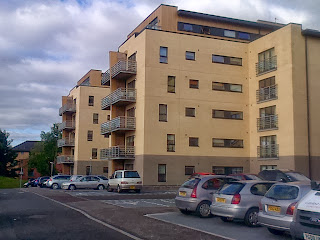